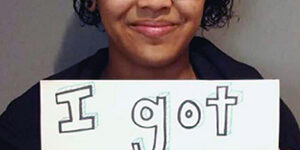 Dominique had never been unemployed until last summer. For the past eight years, she has worked hard to provide for herself and her three young boys.

The daughter of a pastor, Dominique felt she was not allowed to do things other kids did as a teenager. So she dropped out of school and moved out of her parents’ home when she was just 16. “I made the choice because I wanted my freedom.”

Dominique found work in retail and then as a customer service representative for a telecommunications company. She did well and advanced into roles with more responsibilities. But in the spring of 2016, she was laid off. “I was living well—I had rented a condo, bought a car and established my career. But I lost all of that when I lost my job. It’s been a struggle.”

Now at age 24, Dominique is starting over. When she learned about Goodwill’s Barista Training program, she thought it might be a good option for her. “I had some experience working as a barista, but I wanted to finesse my skills before I started applying for jobs.”

Goodwill also helped her reestablish stability for her family. “My instructors were really great at helping me to stay balanced. They helped me find childcare for my kids and helped with my housing situation. The people at Goodwill have so many connections to different resources. They are so willing to lend a hand.”

Dominique accepted a position at Costco and, most recently, as a barista with Starbucks. She also hopes to return to Goodwill to finish her GED and eventually go to school to obtain a business degree.

“What I learned most from Goodwill is to prosper where you’re planted. Wherever you are—even if it’s not where you ultimately want to be—you need to do the best you can and utilize all of your resources. Goodwill helps you bridge the gap between where you are and where you want to be.”

Gunner’s Success Story
May 16, 2020
Career Pathways
Learn more about our programs and services!